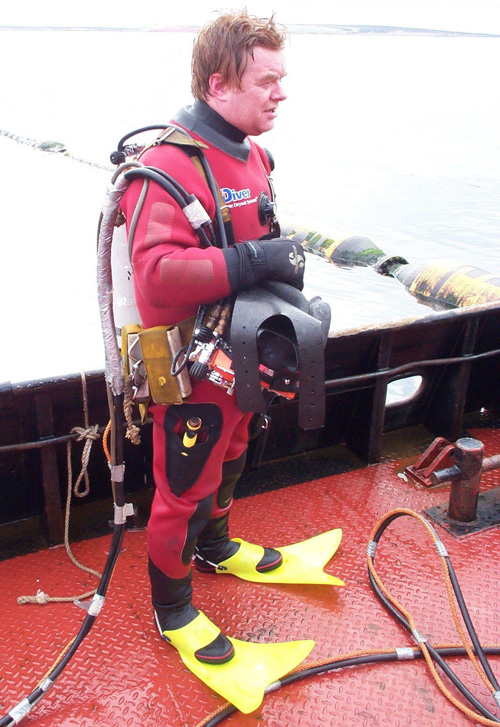 It is well known that the ”Bends” (Decompression Illness) is a hazard faced by all divers and is caused by gas bubbles forming in the body tissues usually after a problem dive. If untreated it can be debilitating or fatal. The only definitive treatment is rapid recompression therapy in a hyperbaric chamber, often referred to in commercial diving as a “Pot”. Fortunately with improved legislation (professional divers are governed by the Diving at Work Regulations 1997 – DWR97), better diving practices and improvements in equipment DCI has become less common.

Due to incidents in the past DWR97 require commercial diving companies to have access to recompression facilities within 2 hours. As a result both the Flotta Oil Terminal and Heriot-Watt University operated containerised 54” diameter, twin-lock air chambers. Standard industry practice, is to have medical advice provided by a specialist in diving medicine over the phone. The dive team also acted as the internal attendants. As a result the National Hyperbaric Unit (NHU) was established at ARI in the early days of North Sea diving The chamber in Aberdeen is staffed by a team of NHS Consultant grade doctors and intensive care unit nurses and is supported by Oil Industry trained technicians on a 24 hour basis.

In the late 80s diving as a recreational activity saw a huge growth in popularity. Scapa Flow with its large concentration of wrecks became a popular destination for UK divers and soon earned an international reputation. Prior to August 1998, all cases of DCI presenting at Scapa Flow were airlifted to Aberdeen for treatment. However, with the increasing number of divers came an increasing number of incidents of DCI. Due to the risk of flying a patient, the likely demands on the air ambulance service and following the fatal accident involving a local shellfish diver, the university was approached in 1998 by NHS Orkney to assist in the treatment of diving emergencies. In 2000 due to the poor level of care offered at some commercial diving chambers the National Services Division tasked the NHU to initiate and manage a National Registration Service (NRS) for chamber carrying out treatments.

From the outset several key issues were apparent.

Moving from a diving to a clinical situation it was apparent that the dive team would need additional training and to recruit nursing assistance. This was relatively simple to rectify, several nurses from the Balfour joined the team. Together with some of the dive team they undertook the Hyperbaric Nursing module run at ARI. Others participated in the Undersea Hyperbaric Medical Society’s training programme and attended the first course run in the UK at the MoD hospital Haslar.

The university’s chamber was housed in a container for easy of transport to where ever it was needed to cover diving operations. Initially, when the Dive Unit was relocated from Edinburgh to Orkney it was located at the Orkney Water Test Centre at the Flotta Oil Terminal before moving across to the International Centre for Island Technology in Stromness once renovations at the Old Academy were completed.

In 1999 following the discussions with NHSO and with limited options available at the Old Academy the chamber was moved into the “Garage”. Not only did this provide sufficient space for the technicians to work but provided an are for patient examination. Unfortunately the compressor room, kitchen and toilets were in the main ICIT building. The first recompression treatment was carried out on the 24 June 1999.

Improved building facilities remained a recommendation from the NSD audits until 2002 when negotiations were completed to take over the lease of the Old Metal Workshop. Before renovations could be started the university relocated the Dive Unit back to Edinburgh. Faced with the closure of the OHU the Orkney Hyperbaric Trust was formed. OHT took over the lease of the Old Metal Workshop and purchased the chamber from the university. Medical support was continued to be provided by the GPs at the Stromness Surgery, some nursing support from NHS staff, and SULA Diving provide all technical and the remaining internal attendant support. Renovations were com

Due to logistical constraints 54” diameter twin-lock chambers are standard in commercial diving operations. However , they present several problems in a clinical setting:

The development plan for the unit from the out set had been to acquire a 2 metre diameter twin-lock system and retain the smaller unit as the back-up both under the university and OHT.

Towards the end of 2008 sufficient funds had been raised by OHT through treatment charges and grants from Orkney Islands Council & NHS Orkney to proceed with the plan. Design specifications were agreed and a supplier – Submarine Manufacturing & Products – identified. Details of the plan to meet NRS criteria were revealed to the audit team on their inspection. The team then informed OHT that the smaller chamber would no longer meet the audit requirements. Although a larger chamber would OHT felt a second chamber was an equally important issue.

After discussions with SMP a solution was found, a smaller version of a triple-lock chamber they had built for the Singapore Navy could be redesigned to accommodate OHT requirements. In order to accommodate the system of sufficient size and its associated equipment further building works were needed. The final plan arrived at, involved demolishing the existing compressor room and incorporating this into the main room. Two purpose built containers would then be joined to the building to provide all the gas services.

The first turf was dug on the 24 August 2010 at the start of a phased construction programme by R Clouston Ltd .

Phase 2 involved partitioning off the main room to allow completion of the preparatory building works for the new system. During this stage of the works the existing chamber was kept in the building with gas being supplied from two quads (racks of 16 x 50ltrs cylinders)

Phase 3 involved moving the 54” chamber back into its old home while the new system was connected to all the required services.